Before we get too far into the weeds, let me offer some definitions. CI/CD has some broadly-accepted definitions, but let me put a fine point on what precisely I’m talking about, just to avoid any confusion.

There are many reasons people cite for not employing CDE (yet). The most common reason I’ve heard is a lack of (sufficient) automated tests to instill the confidence necessary to automatically deliver software.

This is underlined by the wikipedia article on the subject, which cites (among others), two salient obstalces to CDE adoption:

Other reasons are usually variations on this theme. Let me enumerate a few I’ve run into over the years:

You’re probably noticing the theme here. Every common objection to CDE boils down to essentially one thing: A human must validate the changes before they are delivered.

And this, per se, isn’t a problem. What I do see as a problem is the common knee-jerk reaction to this situation:

Then we cannot continuously deliver until our automation is sufficiently advanced to eliminate the need for human validation.

The fear of imperfect automation, and in some cases the dogmatic belief that humans cannot be automated away, is the obstacle to CDE adoption.

So how do you overcome this fear?

The fear, broadly speaking, is appropriate. Humans should be involved in software validation. That dogmatic belief is actually correct. The problem isn’t actually the fear. The problem lies elsewhere.

Before I spill the beans on where I think the problem is, though, let’s take a look at the evolution of a typical CI/CD pipeline.

This is based loosely on my experience working with the eCommerce development team at Bugaboo, but it should be reminiscent of many projects.

This pipeline involves several manual phases: Writing the pull request, Quality Assurance testing (QA), Acceptance Testing, and writing documentation or release notes. Several of these stages have the potential to restart the entire pipeline, by sending work or tweaks back to the developer to fix a bug or tweak a feature.

The goal is usually to achieve a pipeline that looks a bit more like this:

By automating QA with better unit and integration tests, and possibly even automating Acceptance Testing with techniques like Behavior-driven development, the goal is to remove the human validation from the equation.

Often documentation and release notes are overlooked here, thus the question mark in my diagram. The most prevalent attitude I’ve seen here is “docs aren’t code, so they don’t matter to our pipeline”, and then documentation is manually updated sometime after deployment.

Many teams have achieved CI/CD success with this approach. But it’s usually a very long process, taking months or even years, to automate enough that the team feels confident with CD or CDE.

A quick side rant: Note that merging to dev and staging have been eliminated. This assumes trunk-based development, which is far superior to the over-complicated GitFlow in every situation I’ve ever seen. GitFlow should be banished, because it assumes, and therefore encourages, manual work between every branch.

What’s important to see about this new diagram is that every manual step still exists. Writing code, manual QA, manual acceptance testing, and manual documentation are all still there. The only difference is the order in which they happen.

“Yeah, but how can we do QA and Acceptance Testing before deploying?” you may say. Okay, you got me. You have a valid point. I left out one piece of magic from my diagram. Let me remedy the situation:

With the (conceptually) simple addition of a review environment before the merge to mainline, all of the human validation steps can take place before that final merge. QA testing, acceptance testing, and writing release notes and documentation can all happen while the code is still comfortably sitting in a feature branch. The only reason these are normally done later is habit–habit formed by working on waterfall projects.

This is the key take-away from the article: It’s just a matter of “front-loading” all the manual work to earlier in the process.

Of course simple concepts aren’t always simple in practice. I can already hear your brain screaming at me about all of the reasons this won’t work in your situation.

For the rest of this article, let me do my best to set your brain at ease on all of these objections by describing a few different ways you can perform the magical “review” step.

Often the simplest and quickest way to switch to this new CD-without-CI approach is to re-purpose your existing staging environment. This usually requires only minor changes to your existing CI configuration. Many teams use a specific branch that is always deployed to staging. This is a great approach. The key is to push to this branch before pushing to your mainline branch (dev in GitFlow).

Work flows from a feature branch, to staging, then after validation, finally to master.

The approach I advocate looks only slightly different on paper, but the implications are significant.

Work is still done in a feature branch, and it still flows to staging for validation, but the staging (or review) environment is considered ephemeral. There’s nothing “special” about it, as far as the workflow is concerned. It’s only a sandbox. Every push to staging is eventually thrown away.

Finally, once all validation is complete, the pull request for the feature can be merged into master, and CD(E) is kicked off.

This subtle change might seem trivial at first blush, but it offers a number of advantages:

I hope from this it’s clear that for any project where a staging environment is feasible, review environments should also be feasible, just by changing some assumptions about staging.

Of course, on a large project, there can be a lot of contention over a single review environment. If Bob is using the review environment for his feature, Alice must wait until he’s done. That may be 15 minutes, or 6 days, depending on the complexity of the feature, and how much testing is needed. 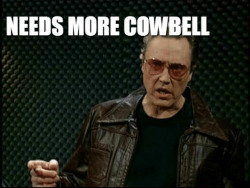 One way to resolve this problem is to create additional review environments. This may be simple or complex, depending on the complexity of the project. In many cases, all review environments can share the same external dependencies (such as databases, or third-party APIs), which can simplify the configuration. But if testing database migration scripts is part of your process, you may need to create new database instances for each review environment. I leave these details in the capable hands of your infrastructure team. You just need to be sure to consider these things.

How many review environments should you build? Only you can answer this, and it depends a lot on how your teams work. There are different strategies you might choose: 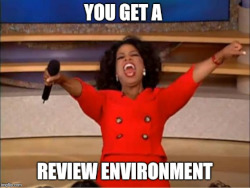 The gold-standard for review environments is dynamic review environments that are automatically generated for each pull request. Your pipeline assigns a unique URL to each environment, perhaps named after the branch. This URL can be used by QA, or for acceptance testing, even for sprint demos.

The use of dynamic review environments provides several advantages over fixed environments:

Having said that, there can be prohibitive technical challenges for some projects, especially those with complex external dependencies.

The ideal candidate for dynamic review environments is a self-contained project that can be run in a Docker container. My preference is to deploy to a Kubernetes cluster, which can usually be configured for easy auto-scaling. AWS Elastic Beanstalk can also provide this functionality, if you prefer that route, as well can many other cloud platform solutions.

If your project is simple enough, GitLab’s Auto DevOps can be an attractive solution as well. It integrates with an existing Kubernetes cluster, or you can use it to spin up a fresh cluster on Googles Kubernetes Engine.

But this can be done on large, complex projects. We successfully implemented dynamic review environments at Bugaboo for their eCommerce CMS platform, which had a large number of external dependencies. But it did take some effort.

Maybe I’ve now convinced you that it is possible to do CD without CI. But “Why bother?” you may be asking. “What’s the value to shuffling things around, if we’re still manually validating everything?” Well, I’m glad I imagined you asking that!

One reason to make such a change, is that it makes automating the rest easier. You can think of this as a sort of dancing skeleton for a complete CI/CD pipeline. By putting the broad pieces in place, there’s less work to do later as you flesh out the automated testing process, and replace manual QA processes with automated ones.

And that reason is probably sufficient on its own, but I think there’s a much more important reason, which would stand on its own even if absolutely no other CI were implemented (although I strongly believe you should implement at least a minimal CI). 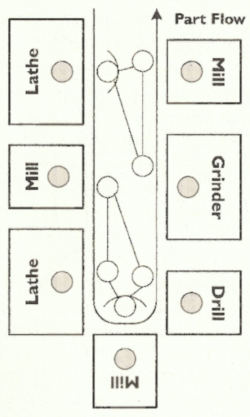 Figure 8-4 from The Toyota Way

An interesting concept from Lean manufacturing is the U-shaped cell. Think of it like an assembly line bent in the middle, so that the input and output are next to each other.

Also, unlike a traditional assembly line, a single person works in a U-shaped cell. They do all the work from start to finish, that is needed in that cell. (There may be many U cells involved in the production of a single product, though.) Organized around the U are the various parts and tools needed to conduct their job. For a manufacturing plant, that may be a bucket of screws, a drill, a lathe, and some paint.

For our typical developer, we instead have tools like a text editor, version control, automated and manual tests, linters, etc.

Conventional workflows, like waterfall, and dare I say GitFlow, keep many of these tools separated by vast distances, with gatekeepers between them. The individual developer has control over only a small part of the process. This leads to a lot of wasted time, while stories wait for the next work center to pick them up. It leads to a lot of frustration, as developers get delayed feedback when something goes wrong. It leads to apathy, when developers assume that any problems will be caught later.

In this scenario, the developer controls a feature from start to finish, only temporarily handing it off, say, to a QA engineer for validation, or to the end-user for acceptance testing. After each of these steps, the work goes right back to the developer, who then responds to the feedback, and when ready, advances to the next tool in the chain, until finally it is merged to master. In a sense, the human validation steps just become tools in the tool chain.

So while the absolute amount of work being done may not change, practically all queuing time is eliminated, the feedback cycle is shortened, and context is preserved in the mind of a single developer, rather than spread over multiple work centers. I see all of these as very worth-while goals.

A change of mindset

As with so many practices that may seem counter-intuitive, such as making money with free software, or improving efficiency by reducing batch size, what is necessary is a change of mindset.

The conventional mindset seeks to automate as much of the steps we’re currently doing, as a means toward the end of continuous delivery.

What I propose instead is to organize for continuous delivery, then optionally automate, where it makes sense.

I know this can be a lot to swallow. I hope I’ve made sense, but I expect there to be questions! Please leave a comment below, or feel free to contact me privately. I would love to hear your thoughts.

Did you enjoy this article? Every day I send new, exclusive content like this to my "inner circle", including notifications whenever new full-length articles like this are published. I promise to respect your inbox, and abide by my privacy policy. Not sure? Browse the archive