About three months ago I shared this meme on LinkedIn, and it “went viral”, as they say, with over 1.2 million impressions, over 400 comments, and over 400 shares. 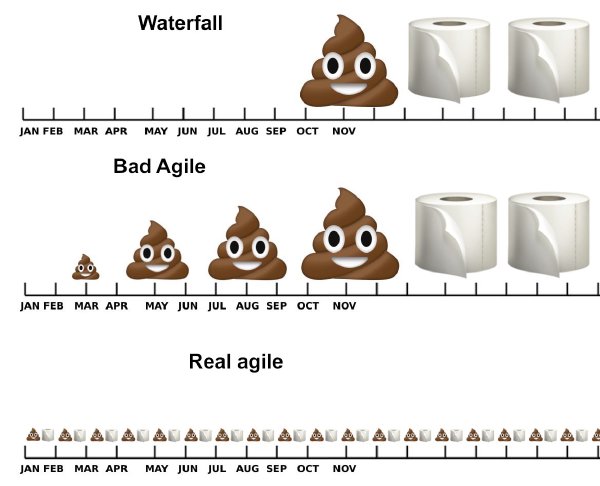 I guess it’s proof that shit posting really does pay off? Anyway, I digress.

Without the full context, people were forced to provide their own interpretation of the meme, which I found to be quite entertaining. Some thought I was criticizing agile software development. Some thought I was unenlightened, and had missed some vital element of “true agility”. But the most interesting responses to me were those that tried to defend “Waterfall”.

Here’s a representative one, (edited and somewhat paraphrased for brevity):

Them: In my experience, the development process (Agile or Waterfall) does not influence the success if a project.

Me: What does affect the success of a project, then?

Them: In short, good leadership.

Me: And what makes for good leadership?

Them: A good leader knows how balance the expectation against what his organization can deliver. That includes negotating expectations with customers/stakeholders and motivating/inspiring the organisation/teammembers. This is what determines the success, whether in a waterfall or scrum/agile project.

Me: Would you agree that it’s normal for some expectations to change during the course of most software projects? And that good management is able to handle such changes well?

Them: Yes. I would even go further and say that the expectations are not fully known at the start. With fix priced projects this causes conflicts.

Me: So what you’ve just described is what the meme is meant to convey. When we approach projects with agility, we have a chance to reevaluate frequently, which minimizes the accumulation of 💩.

As in this case, frequently, when I hear someone defending “Waterfall”, and dig deeper, their version of Waterfall is actually small-a agile. 🤷