Last week I ranted a bit about NPS, then so-called Net Promoter Score. In that rant, I suggested one possible alternative, for a certain type of market research, is Sean Ellis’ Product-Market Fit Survey. I thought it would be fun to do my own NPS and PMF surveys and compare results. So I asked you, my readers, to do a survey about this list. 20 of you responded.

Today I’ll share the NPS and PMF results of that survey, and offer my observations.

First the click-bait headlines for each:

The Daily Commit has an NPS score of 36, aka “favorable”

The Daily Commit has a PMF score of 15%, aka “needs work”

So let’s break these two results down a bit, and see if we can learn anything interesting from either.

NPS of The Daily Commit

Recall that NPS consists of a single question, on a scale of 0 to 10 (10 being most likely):

How likely is it that you would recommend The Daily Commit to a friend or colleague? 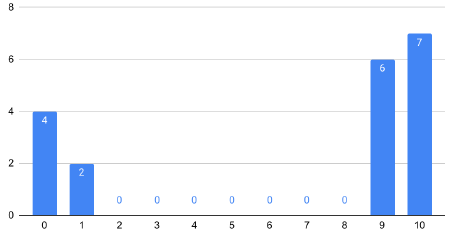 Actually, I jest. My NPS score was 36.8, but the responses were not polarizing at all. The calculation is just weird and obscures any valuable information. Here’s the actual distribution of responses: 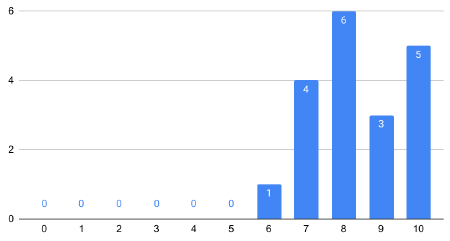 Looking at the chart, one could easily be justified thinking “It looks like everyone feels positively about The Daily Commit”.

But of course, I didn’t just ask for a raking. I also asked the prescribed follow-up question:

What is the most important reason for your score in the last question?

Fewer people answered this one—only 12. And most answers touted something the reader thought was positive about the list, which helps to strengthen the impression that everyone feels positively about The Daily Commit. But one response stood out. I didn’t check how this respondant answered the 0-10 question, but their explanation was interesting, and really points to one of my main problems with NPS:

PMF of The Daily Commit

How would you feel if you could no longer read The Daily Commit?

The purpose of this survey is to gauge where the product (my daily mailing list in this case) has reached “product market fit”. And a score of 40% or more answering “Very disappointed” is considered the success metric.

As I mentioned above, I scored 15%. 3 respondants out of 20 answered “very disappointed”.

Which is more useful?

Somehow that doesn’t feel nearly as reinforcing as the “good” NPS score of 36.8. 15% score when I wanted 40% sounds like a failure, whereas the NPS score feels like a modest success.

So which is actually more useful?

Well, I’d venture a guess that the PMF is more useful to me. Why? Well, my goal is to provide meaningful and valuable content to my readers. Only 15% of my readers say they’d be “very disappointed” if I stopped producing this list. So it sounds like I have work to do.

If I only looked at the NPS score, I might feel like I “had made it”, when in reality, I probably haven’t.

I also asked my readers for their job titles, and got a wide variety of responses. I may dig into some more insights in a later post, but for now let me summarize with this chart: 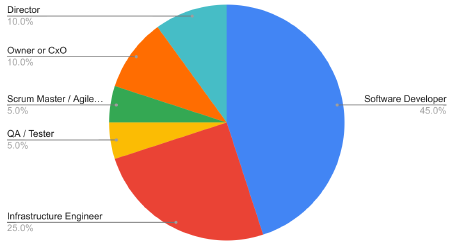 Although software developers make up nearly half of the respondants, the other half is incredibly diverse, ranging from owners and CxOs to IT directors, QA analysis, and Scrum Masters.

It’s hard for me to imagine a single daily mailing list that the average person in each of these roles would be “very disappointed” to see go away.

So where does that leave me?

I don’t have any plans to drastically shake things up. I probably will do a bit of soul searching to decide which audience I think I’m best suited to help, and over time I may try to tailor my content to that audience.

If that means some of this content becomes less useful to some of you over time, I do apologize. But we can’t be everything to everyone all the time.

For now, a genuine thanks to everyone who responded to the survey!

Why NPS isn't very useful: A look at the NPS of SAFe

Often criticized for its statistical silliness, I see that as the least silly part of NPS. Here I break down where I think NPS really fails, examining the recent "NPS of SAFe" article by Age of Product.

Should you build an MVP?

Why are you reading this? Why do people read what you write?