A while back I got this meeting invitation: 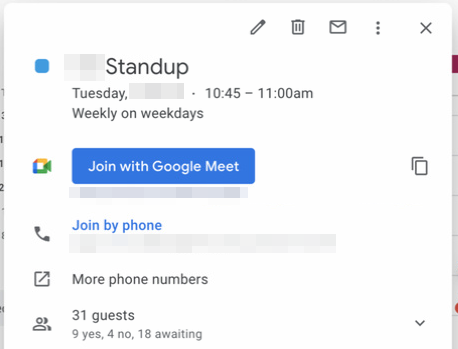 But since this team wasn’t expressly using Scrum, let’s also consider other popular opinions about this staple of a meeting. Here are a few I found on Google:

So how did this 31-person standup fare?

Well, to start, barely more than half of the invitees actually attended. But still, 17 people makes for a pretty crowded daily Zoom call!

Then the meeting chair went through a list of everyone in attendance and asked their status. A number of attendees responded by saying something like “Oh no, my Jira board is outdated. I’ll add a ticket for XYZ as soon as this meeting is over.”

The most concerning was the woman who said “I’m new, and I’m struggling to understand my task.” Ah-ha! An obstacle to overcome! So we’ll get someone to help her, right? “Okay, good luck!” was the response, and we moved on to the next person. 🤦‍♂️

And the icing on the cake: The last 5 minutes of this meeting was dedicated to the sprint “theme”, which for the time I was involved one developer providing a monologue about a favorite sporting event.

Now I don’t know the original purpose of this daily standup. But it didn’t appear to be serving any of the common purposes for a daily meeting. Obstacles were ignored. There was no accountability—people were editing their sprint tasks in an ad-hoc manner, with no feedback. There was no focus. There was no community building, and there was no learning. It was easy to tell by the frequent delayed response that most people were entirely zoned out of the meeting, just waiting for their name to be called so they could say something random until their turn was over.

If that’s not proof enough of the dysfunction of this meeting, after a week of these, one subset of 5 developers in this larger team decided to do their own post-daily daily, so they could actually discuss things relevant to them.

Why do you estimate?

Estimates or no estimates? Unless or until you know why you want an estimate, even a "perfect" estimate is wasted.

20 years after the original, this is my take on an updated "Joel Test"