If you don’t know what GitFlow is, you can stop reading now, and consider yourself better for it.

If you do know what GitFlow is, it’s likely because your current team, or a past one, has used it as a way to control software delivery. At a high level, GitFlow looks like this: 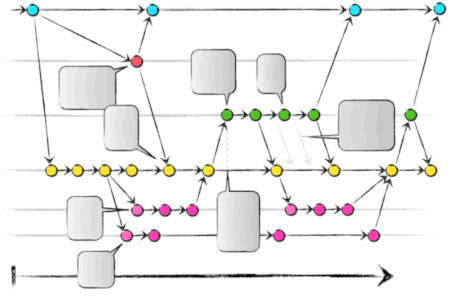 This process is fraught with problems. Here are a few:

Fortunately, to his credit, even the creator of GitFlow, Vincent Driessen, has recognized that his process does not work well with modern agile software delivery. In March of 2020, he added a preamble to his post stating, in part:

[T]he most popular type of software that is being developed with Git is shifting more towards web apps — at least in my filter bubble. Web apps are typically continuously delivered, not rolled back, and you don’t have to support multiple versions of the software running in the wild.

This is not the class of software that I had in mind when I wrote the blog post 10 years ago. If your team is doing continuous delivery of software, I would suggest to adopt a much simpler workflow instead of trying to shoehorn git-flow into your team.

Although he still advocates GitFlow for projects that “need to support multiple versions of your software in the wild”. I think this is also wrong. I don’t know of any circumstance where GitFlow is an appropriate tool, simply because there are lighter-weight alternatives. But more on that another day…

How to experiment with CD in a GitFlow environment

Can we experiment with continuous deployment without completely migrating away from GitFlow first? Here are a couple approaches.

The panel jumps in and discusses the Minimum Viable Continuous Deployment from the manifesto on the web and discuss where they agree and disagree with the requirements listed there and clarify some of the ideas in the document.